Zombie Catchers in Farsi is one of the most popular and attractive games for Android. This beautiful and attractive Android game has attracted many users. One hundred million installs on Google Play and a very good score of 4.4 out of 5 are all proofs of how good Zombie Catchers is. Now that we have explained so much about the charms of this game, we are going to introduce you to this game completely. So stay with us. 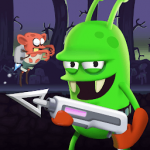 The game Zombie Catchers tells us a story of a food center full of zombies. In this beautiful Android game, you have to go to the zombie war. Hunt them down and expose them to the public. Do not be fooled by the simple scenario of the game. The further you go in this Android game, the more intelligent the zombies will be, and the harder it will be to hunt them. But you, as the owner and maybe the manager of this collection, have a duty to hunt a lot of zombies for your zoo. Get them out there and get visitors flocking to your zoo. You can create a very good business for yourself by hunting zombies. Stay with us for a more complete introduction of this game.

As we mentioned above, Zombie Catchers is an Android game for hunting zombies. At the beginning of the game, a number of clients intend to enter the zombie holding complex with their cars. But after a while, one of the managers will turn to you and ask you to hunt more zombies. By hunting more zombies, you can put them in special devices and prepare the drink of your choice from them. You have to go to wars with your car. The favorite food of zombies is human brain. You should pay attention to the signs in the forests. Signs show you where zombies live.

Just place the human brain in the place where the zombies live and then move away from the trap. When the zombies come out of their habitat to eat, you have to shoot them with your gun and capture them alive with a twisted rope and transfer them to the plane used to transport the zombies. In each stage you are required to collect a number of zombies from the forest and take them to your center. Put them in a special device so that they are used according to the use of your collection. Zombie Catchers game is one of the interesting games that you will never get tired of working with.

Many users are looking to download Zombie Catchers infinite or mod. But we recommend not to use the versions of this game and download the original version.