West Gunfighter game is a beautiful and attractive game in the category of adventure games. Today we are going to introduce you the West Gunfighter game. A beautiful game with a revolver theme in the wild west. If you also want to come to the wild era with us, this game can be an attractive and suitable option for you. Among the Android games that we introduce to you, dear users, this game also has a very good quality and a low volume. Stay with us and introduce this game. 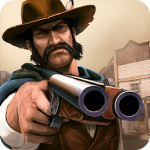 Adventure games always have their fans. This style of games offers great freedom to users and allows users to move easily in the game environment. The game West Gunfighter, which we introduce to you below, is also not separate from this issue. This beautiful and attractive Android game gives you the feeling of a sniper who is constantly moving in the wild west. This revolver is moving from one city to another and from one village to another. After reaching each place, he faces challenges and must overcome them. If you are also interested in knowing what happened that evening, stay with us until the end. At the end of this post, you can download West Gunfighter.

As we mentioned above, West Gunfighter is an adventure game. In this Android game , when the game starts, you are fighting with another cowboy. You pick up your revolver and shoot at it. After shooting a few times, the game will ask you to buy another gun for your convenience. You can buy a shotgun by going to the gun store. By doing this, it will be easier for you to attack the other cowboy. You can easily shoot at that cowboy and kill him.

Once you complete the first challenge of the West Gunfighter game. It’s time to use your horse. In the Wild West, horses have always been a friend to cowboys and gunslingers. By touching the horse option, your horse will move towards you and you will automatically ride it. After traveling for a short time, you reach a village and you have to face your challenges there. You can engage in very difficult duels with some criminals of this village. You can also visit different parts of the village and enjoy playing other games. At the same time, you can shoot people with your movement in the village. Of course, be very careful. As soon as you shoot the first shot at one of the villagers, the rest of the villagers will attack you with their weapons and try to kill you in the West Gunfighter game.