Vector in Farsi, Vector is one of the beautiful and highly downloaded games for the Android operating system. Today, we are going to introduce the vector game, which is the narration of a parkour work, to you, dear users of DigiRoid. This Android game introduces itself as an attractive and beautiful game in the global market of Google Play with more than one hundred million installations. In the future, stay with us to introduce this game to you completely. Stay with us. 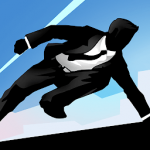 Today we are going to introduce you a beautiful game. The game that we will introduce to you today is classified as arcade games. Of course, Vector can also be placed in the category of action games. This beautiful game has 100 million installs on Google Play. It is also at a very good level in terms of attractiveness and popularity. The high score of 4.4 out of 5 can testify to the high popularity of this Android gamebe In this beautiful game, you play the role of a parkour fugitive who must escape from the agents and not get caught. The level of this game seems very simple at first glance. Especially since the two-dimensional mode of this game reminds us of simple games. But the story and flow of the game will be very interesting for us. When you face the difficulties and challenges of Vector step by step, you will know the charms of this game. We will learn more about this game later.

Introducing and teaching the vector game

As we mentioned above, Vector is about a parkour. In this game, as a parkour athlete, you have to escape from people to reach your destination safely. The vector game is included in the category of two-dimensional games. At the beginning of the game you will run from the top of a building. Someone is looking for you who is very intent on arresting you. When you reach the first height, you have to drag your finger from the bottom to the top to make the parkour jump. In the future, you will face more obstacles that you have to overcome with appropriate moves. In the vector game you have to jump from tall buildings. You have to pass under the high obstacles to reach the end of the game. The beautiful and attractive vector game will definitely entertain you for hours.

Vector is a turn-based game. After completing each stage, you will enter more difficult stages. I hope you enjoy playing Vector.

Some other features of Vector game