Tizball is an Iranian warship game for Android users. This game is included in the category of action games. Today, in this post, we are going to introduce the Iranian game. Dear users of DigiRoid website, you can also install Tizball after downloading this game. If you are interested in a very beautiful Iranian aviation game, stay with us until the end because this game is very different from other games produced. Stay with us. 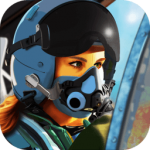 Among the Android games, the war plane game also has many fans. When you ask a child what career they would like to have in the future, the answer is very likely to be a pilot. Yes, piloting is one of the favorite jobs of children. But flying a fighter plane is more fun than flying a passenger plane. Therefore, more than 1 million users in Iran have downloaded the new version of Tizball game. Today, in this post, we are going to introduce this attractive Iranian game to you dear users. If you are also interested in this game, stay with us.

Gameplay of the teesball game

Gameplay is a very important part of mobile and video games. The game of teesball has also worked very well in this field. This Android game gives you the real feeling of flying with Iranian fighters and makes you enjoy your flight to the fullest. In this attractive and beautiful Android game, you will be given missions as a professional pilot. You are required to successfully complete all missions in order to defend your country. To succeed in all missions, you need strong and advanced planes. So you have to upgrade your war equipment.

Users who have downloaded the old version of Teesball are aware of the features of this game. As this Android game goes forward, it offers better graphics to its users. The graphics and sound used in this game are at a very good level. The graphics and sounds of the teesball game can make you feel like a professional pilot in the cockpit of a warplane so that you can enjoy playing the game to the fullest. You have to upgrade your planes with the rewards you get after each successful mission. Buy a new rocket. You can destroy your enemies more easily with the airship and newer equipment.