The game Temple Run 2 in Farsi is one of the most attractive games for the Android operating system. After making the first version of this game, Imangi Studios has made the second version of Temple Run 2. Now we are going to review this Android game in detail in this post. Stay with us until the end of this post. 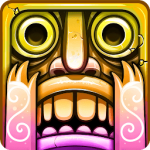 We are at your service, dear users of the Digiroyd website, by introducing and installing the Temple Run 2 game for the Android operating system. This game is classified as action. Because action games always have their fans. Maybe that’s why this beautiful Android game has more than five hundred million installs in the global market of Google Play. Of course, the popularity of this game is not limited to the number of installs. It is true that many users have downloaded the Temple Run 2 game, but they ranked this beautiful Android game among the popular games by registering a score of 4.2 out of 5. Now we will review the features and of course how to play this fascinating game. So stay with us and DJ Royd .

The users who downloaded the new version of Temple Run 2 said that it is an endless runner game. The product of the game company Imangi Studios has many similarities with Subway Surfers . In both products, you have to run fast. During your run, you encounter many obstacles that you have to pass quickly. In this Android game, the longer you are running, the faster your speed will be and the more difficult it will be for you to run and race. Of course, this game has some differences compared to Subway Surfers.

If you have installed the game Temple Run 2, you know that in this game the path is not just a straight path. In this fascinating game, the runner is running away from the distant monster. When he is running fast, he has to cross obstacles on his way. But in addition to the obstacles in his way, the changes in the route also make him very sad. In this Android game you have to carefully pass the obstacles. Sometimes you get involved in route changes. In these cases, you have to turn left or right to continue on your way. This is repeated over and over until eventually you get bored and make a mistake. Your mistake will make you lose. Next, we are with you by downloading the game Temple Run 2.