Swipe Brick Breaker is one of the most interesting games for Android. This beautiful and attractive game is one of the products of Nine Games studio . Swipe Brick Breaker can be placed in the category of very popular games. This Android game with more than one hundred million installs on Google Play introduces itself as a highly downloaded game. Now we will introduce this interesting Android game together. If you are also interested in getting to know this game, stay with us in DigiRoid until the end. 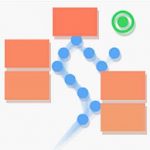 Swipe Brick Breaker is one of the most downloaded games. This game is very interesting. A very good rating of 4.5 out of 5 is proof of the high appeal of this Android game . The scenario of this game is very easy and simple. You are supposed to use the ball you have to destroy the bricks in the game environment. Break them to prevent them from growing. But the same scenario and simple gameplay can sometimes be a disaster for gamers. You will come to your senses and see that the bricks are exactly at a stage where it is very difficult to control them. Then you have no choice but to lose the game. We will get to know more about this game. Stay with us.

As we mentioned above, Swipe Brick Breaker is a game with the scenario of destroying bricks with balls. At the beginning of the game there are two or three bricks in the middle of the screen. You have to throw your ball at them. There is a number on each brick. For example, the number 5 may be engraved on the bricks. At this time, you need 5 balls to destroy this brick. You aim your balls at the target brick and if you do it right, the brick will break. Each time you throw the ball at the bricks, they will move one step closer to you. Also, the bricks that are added to the game at each stage require more balls to break. In Swipe Brick Breaker, sometimes blue dots appear on the game screen. If you can hit them with your balls, then a ball will be added to your collection of balls.

You have to destroy the bricks by increasing your balls and aiming very accurately. If you can do this correctly, you will stay in the game. But if you don’t have the ability to do this, then your position will be jeopardized as the bricks approach your boundary line at every stage of the game. When the bricks reach the boundary line with their progress, they can cause you to lose. This cycle will be repeated again and again until finally you will make a mistake somewhere and you will not be able to destroy the bricks well. The key to success in Swipe Brick Breaker is to aim  accurately and destroy the bricks with the least number of balls. You have to aim so accurately that you can keep your balls in play. The more balls you keep in play, the closer you are to victory.

Swipe Brick Breaker is an unlimited game and you can win this game based on the record you set.