State.io is an android game in strategy style. In this beautiful and attractive Android game, you have to rely on your high intelligence to use a suitable strategy to win the game. State.io game is attractive in that it is very simple and smooth. You can play this game with the help of a very low power and old Android device. If you are also interested in this interesting Android game, stay with us until the end. 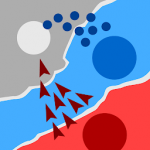 One of the most attractive styles for playing different games is the strategy style game. Many users are looking to play this style of games. There are many types of strategy games. One of them is war and the other is conquest. Today we are going to introduce you to a type of conquest game. In the Android game State.io, you have to strengthen yourself using the rewards you get when you win so that you can destroy your enemies very well and quickly. In the following, we will give a full introduction to this Android game. State.io is a very simple game and does not require high complexity. For this reason, it can be used as a normal game in the subway or bus or in your free time. That’s why this Android gameIn the global market, Google Play has more than a hundred million installations. Now let’s check together the features of this game.

At the start of this Android strategy game, you and your opponent have two points with the same number of people. When the game starts you will be on a map. In this map, there is a blue dot and a red dot. The third point is also gray. Each of these points represents a city or state. By swiping from your point to one of the other two points, your people or troops will attack that point. If the number of forces entering the city is more than the forces inside the city, then the city will be conquered by the invading forces. Otherwise, the attack will fail. For example, there are 100 troops in your city. At this moment, the forces in your rival’s city also show the number 90. You can attack that city by making a blitz and take it over. So download the State.io game and take control of important cities.

In the case of the strategy game State.io, it is very important to mention that if you want to have an easier victory, you should be able to conquer more cities. When you claim a city for yourself, forces in that city begin to grow and strengthen. Those forces also belong to you and help you in defending or attacking another city. The more stages you go through, the more available cities and your competitors will be. You should try to capture more cities to increase the speed of building and supplying your military forces. Now let’s look at some other features of the State.io game.