Counter 2 game is one of the popular games for fans of gun and war games. Many users are interested in installing Counter 2. Therefore, today in this post from the Digiroyd website, we have introduced this Android game. If you are looking for an interesting Android game, stay with us until the end. 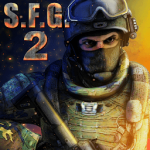 I don’t know anyone who is a gamer and has not used Counter 2. In the colorful world of mobile games, ending an attractive and beautiful game is not a difficult task. When you’re looking for a game for fun, it’s okay to look for a little nostalgia. Some games have entered mobile from the computer world. The game that we introduce to you today is one of these games. In fact, the initial version of Counter was released for the Windows operating system, but gradually and with the popularity of Android devices, this game was also released for mobile phones. So stay with us to introduce you to the game Special Forces Group.

What is the counter game?

Counter Strike is a gun and shooter game. This is a first person game. In this game, which is used both online and offline, you have to compete with other competitors in different maps and remove them from the road. There are two different types of teams in this game. Counter team and terrorist team. At the beginning, you can choose any of these two teams and become a member of it. Then the game starts and you fight with other players along with your teammates. That’s how you have to do your best to win this good and attractive game.

I should also add that this game is suitable for users over twelve years old. So, if your age is less than twelve, we suggest that you definitely skip installing this attractive game. Once you have downloaded Counter 2, just go to the download folder of your mobile phone and install it. After installation, you can use different parts of this beautiful and attractive game.

How many players is the counter game?

Counter 2 is a single to multiplayer game. You can play this interesting game both online and offline. In online mode, you can connect to the main game server. In offline mode, in addition to playing this game on your mobile phone, you can also play it using the hotspot of your mobile phone. In this mode, one person must turn on the hotspot of his mobile phone and others also connect to it. After connecting all players to a hotspot, it’s time for the main player to enter the game and choose the map. In the next step, other players will join this competition by entering the IP shown in the game and compete with others.

As we mentioned above, the new counter 2 game has two types of counter and terrorist teams. When you enter the match, you can choose your desired team. Each team includes different characters that you can choose any of these characters according to your interest and compete with them.

How to win in Special Forces Group2

The winner in the new Counter 2 game is determined by the number of kills in the game. Each player can have a place in the team or individual ranking. For example, when you enter the competition, you eliminate your competitors. Whichever team can inflict more casualties on the opposing team will definitely win that round. At the end, any team that reaches the set and desired number for the win first, wins the game.

But another type of ranking in the Counter 2 game is that you can get a good ranking individually and in the table of other players. For example, you eliminate ten other players during a match. In this case, you will be ranked according to the number of kills. The higher your statistics are, the better your rank will definitely be. This is how you can be in a suitable category compared to other competitors by trying and increasing the quality of your game.

You should be able to compete in this game after downloading Counter 2 for Android. But competing in war games requires a map and suitable environments. Therefore, in this Android game you will have access to a large number of maps. Then you can choose one of these maps according to your taste and even experience. For example, you may be one of the old users of this game and remember only one of the maps in your mind. For this reason, when you enter the game, you must choose the same map. If you use another map, you will definitely face many problems.

In the new Counter 2 game, not knowing the map properly will make you confused in the game environment. This issue has a very high impact on the way and quality of your game and others. For example, you may act very fast and professionally while playing on well-known maps and reach the right points. But if you don’t know the map, you will definitely get confused in this beautiful game and you won’t be able to present a good game. So be sure to choose the right map after downloading the Counter 2 game for Android. Map to suit your opinion.

Other features of the Counter 2 game