Soccer City is one of the beautiful and attractive games for the Android operating system. This beautiful game is one of the products of Aseman game studio. The beautiful football city game has attracted many users. This game introduces itself as an attractive and highly downloaded game in Android markets with more than 1 million installs. If you also want to enjoy managing a football team, stay with us until the end of this post. 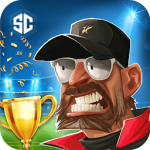 Among Android games, football-style games have a special place in users’ mobile phones. There are different types of football games. Some of them, like the football game Pes 2021, give users a real sense of playing the game. But there is another style of football games that instills a management mode in its users. Soccer City game is one of those games. If you also want to build a professional team in the world of football, stay with us until the end of this post. In this post, we are going to introduce this beautiful Android game to you dear users.

As we mentioned above, the game Shahruftbali is the name of a beautiful Android game for mobile phones. This beautiful and attractive game has attracted many users. In this game, you are not supposed to enter the green rectangle. It is enough to manage and direct your team outside the field. In the game Soccer City, you are supposed to build a professional team in the world of soccer. But building a football team is not that easy. You will definitely face many challenges that you have to overcome one after another. Of course, in this way, many things will come to your aid that you should use.

When it comes to managing a football team, many things come to mind. Things like buying and selling players, hiring a coach, buying or building a beautiful stadium, sponsorship income, increasing the number of spectators, etc. You are facing exactly the same things in the football city game. You have to manage your team well. Buy the best players for your team. You should also hire outstanding coaches for your team. Try to build a professional team full of stars. In this case, you can attract many spectators to your team and bring good income to your club.

Maybe you are looking to download the football city game for PC. But this game is only for the Android operating system, that’s why you need to use Android emulators to use it on the computer.