Soccer Stars game in Farsi is one of those games that can be very interesting for you. If you like soccer games for mobile like me, stay with us. Today we want to introduce you a very cool and professional game. The Android game that we are going to introduce to you today is an online game and you can have fun with it for hours. 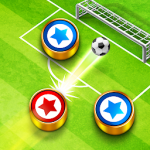 The popular game Soccer Stars is one of the pre-downloaded games made by Mini Clip game studio . This game is a combination of football and air hockey. Soccer Stars is a 2 player or PvP game that you play online. In this game, each player has 5 pieces and they compete with each other. When the starting whistle is blown, it is your job to place your pieces in such a way that the opponent is not able to get the ball into your goal.

In Soccer Stars, you and your opponent take turns hitting the ball. By dragging and then releasing the nut in the right position and angle, you can create the position of the flower with the right power. This is a wonderful game that challenges your strength in several dimensions. Soccer Stars has different stages. You might ask yourself what kind of stages this game has?

In response to your possible question, I must say that the Soccer Stars game has several stages. You can play each stage according to the amount of coins you have. For example, if your total number of coins is 100, you can only play 200 coins. Why 200 coins? Because you have to pay the cost of this game, half of you and half of the opponent. Anyone who wins this game will get 200 coins.

Features of the Soccer Stars game: