Smash Hit is another interesting game for Android in the action category. This Android game is very popular in the way that it has more than one hundred million installs in the global market of Google Play. In the following, we will get to know more about this attractive and beautiful game. Stay with us. 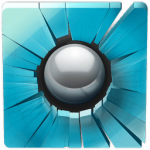 Smash Hit is one of the most interesting games for the Android operating system. In this beautiful Android game, you don’t have a lot of hard work ahead of you at the beginning. In fact, this game is not so complicated that it confuses you. Physics and logic of Smash Hit game is very easy and simple. In the following, we will get to know more about this Android game . This game has attracted many users and, of course, has also brought their positive comments. Stay with us and introduce this game.

Smash Hit is famous for breaking glass with balls. For this reason, many users are looking to download the game of breaking the glass with a ball. We also tried to introduce this game to you completely. This beautiful and attractive game is very simple. At the beginning of its life, the camera moves forward. You have a number of balls that you have to use to make your way. It is very important to control your ball consumption. After moving around the game space for a while, you will come across cones. They are blue. You can get more balls by hitting those cones.

The further you go in this game, the more challenges and obstacles there will be. After some time, cloudy glass will appear in front of you. Now you can pass these obstacles and destroy them by throwing your balls towards them. That’s why Smash Hit is known as a smashing ball game. This cycle is repeated over and over again. until you run out of balls. Smash Hit is an endless game and as long as you can resist this game, this game will continue.

Many users are looking to download the game Smash Hit mod. But we recommend you to definitely use the official version of this game. Never go for modded versions of Android games. Now we will check some other features of this game together.