The slither.io game is an action game. Today we are going to introduce you to one of the memorable games for Android. This Android game is also known as snake fighting or eating snakes. If you also want to enter the war of wild snakes, we suggest you to join us. In the rest of this post, we will get to know some features of the slither.io game. At the end of this post, you can also download this Android game. 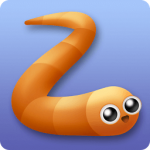 Playing with a snake is one of the games that we used to have a lot of fun with in the past. Since the advent of simple mobile phones such as 1100 etc., snake game has had a very special place among users. Therefore, this game can be considered as a popular and popular game. The game that we introduce to you today definitely has some differences from the snake game of simple mobile phones, but the main base of both is an important element called the snake. Today we are going to introduce the slither.io game for Android to you dear users. This game is very popular. In the global market, Google Play introduces itself as a popular game with more than five hundred million installations and a very good score of 4.5 out of 5. If you are interested in playing this game, stay with us until the end.

As we mentioned above, slither.io Android game is a snake-based game. In this Android game, which is played in two online and offline Fable modes, you have to compete and fight with other snakes. The longer you can survive in this Android game, the more points you will earn. Of course, this Android game actually has no end and is known as an Endless game. At the beginning, when you enter the game, a small snake is available to you. After playing for a while and due to the movement of larger snakes, a part of their body will be separated, which can be a suitable food for the growth of your snake.

In the slither.io game, you can slowly eat small food particles to help your snake grow and make it bigger. There is a shortcut to improve your snake’s growth condition. You can feed them well and grow fast by killing or destroying other snakes. For this, which is somewhat difficult at first, you must be able to work so that the rival snakes’ heads hit your snake’s body. As a result of this collision, they will be destroyed and according to their length, a food suitable for you will be formed. As a snake hunter, you must quickly eat those body parts. If you do not do this, it will probably be eaten by other snakes or destroyed. The more snakes you eat, the bigger you will be and finally you will get a better ranking.