War Rooster is a bonus game for Android. Today in this post we are going to introduce Rooster War game. This Android game that we will introduce in DigiRoid is an online game where you have to compete with real and live users around the world. The new War Rooster game is facing very good downloads in Iranian markets. Therefore, this game can be classified as a popular game. If you are interested in this game, stay with us until the end. 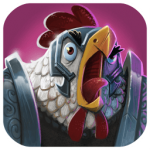 As we mentioned above, this is an online game. Users who have played the old war cock game are familiar with the features of this game. In this Android game, you enter the competition campaign with your rooster. On this side of the field are you and Khorostan, and on the other side of the field is your competitor and his rooster. Each of you should take a defensive or offensive position in turn. When you are attacking, the opponent must be defensive. When your opponent is on the offensive, you have to be defensive. Each of the roosters have their own unique moves and use them to win over each other.

For example, your rooster will fly into the air to attack and knock down the opponent’s rooster with a powerful blow from above. Now, if your opponent is smart, he can guess your move and based on your aggressive move, keep his cock hands up to resist the blow from above. The same applies to you. The new cock fighting game has more variety of movements for roosters that you can use compared to its old version. Each of the warrior roosters has a certain amount of life. The cycle of attack and defense is repeated over and over until one of the roosters lives.

Some other features of the Rooster War game