Son of God game is one of the most attractive and popular Android games. This Android game is made by Paizan game studio. The popularity of this Android game is so high that it has more than one million installs in the global market of Google Play. In the rest of this post, we will get to know this game, and at the end of this post, you can download the Godson game for your loved ones. If you are also interested in this strategy game, stay with us and the Digi Royd website until the end. 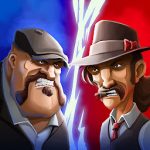 Strategy games have many forms and also have many fans. Some of them assume the mode of war and others the mode of construction of castles and cities. But there are other styles of these games where you have to hit and hurt your opponent in turns. The game of Khoros Jangi as well as the game Bezen Bahadur is exactly like the game of Godfather. Very attractive characters are used in this Android game. The sounds of this Android game are also very attractive and beautiful. In this game, you have to use the characters you have to shoot at your enemies and destroy them. If you are interested in learning more about this fascinating game, stay with us.

We are at your service, dear users, by introducing and downloading the new version of the godfather game. As we said above, this is a beautiful Android game in the style of strategy. In this beautiful game, you will be given a character at the beginning, and you have to destroy the character in front of you using accurate and correct shots. The first hand of the game, which is finished, is the time to choose new characters. You have to choose two other characters besides the first character that the game offers you. Complete your team and prepare for the second battle. In the second battle, you have to compete with your opponent with your team of three.

In the godfather game, you or your opponent must first shoot an arrow at one of the opponent’s characters. Some of the characteristics of the characters are such that you can shoot all three characters on the opposite side of the arrow at the same time. In general, the player who can destroy the other competing characters first will win the game. This cycle is repeated several times. Finally, one person is chosen as the winner of the game.