The football game efootball pes 2021 is one of the newest football games for the Android operating system that is available in the market. This game was launched by Konami game company and now it is well received by users. Today, in this post from the series of posts related to Android games, we are going to introduce this Android game, i.e. efootball pes 2021. So stay with us until the end of this post. 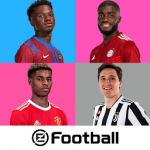 Football is one of the most popular sports in the world and perhaps the most popular sport in our dear country Iran. For this reason, many users spend their time watching football games. Some of the fans of this green rectangle sport are looking to watch the game of their favorite teams, and others are looking to watch all the beautiful games. The same popularity in this sport makes big companies like Konami go to make football games. The popularity of the green rectangle makes games like efootball pes 2021 open. This game, like its other competitor, FIFA 21, has attracted many users. In the following, we will learn more about the features and features of this game, so stay with us.

If you are a fan of video games, you have probably heard the name PES. This series of video games is so popular and well known that gamers understand it well. Maybe at first glance, due to the difficulty of playing this game on Android, you thought of downloading the 2021 football game for the computer. But definitely, the company that made this game has thought properly to run it on Android. For this reason, you can easily run the efootball pes 2021 football game on the Android platform. In this game, you can put your foot in the green rectangle and play your football matches.

There are different sections in the efootball pes 2021 football game that you can do according to your taste and opinion. For example, you can refer to the advanced settings section of this game. You can move players in different teams or even change the team logo. This beautiful game has been well received by users in Android markets. More than 100 million installations are proof of the popularity of this Android game. Now we will examine other features of this game.

Graphics are the first word for playing video games, especially sports. It is very important that you have a quality game in terms of graphics. If the game you are playing does not have beautiful graphics, you will definitely get tired of playing it and leave it. It is very important that the game company provides you with good graphics. At first glance, you may think that you will not get good graphics by downloading the 2021 football game for your phone. You might think that the PES 2021 computer game has stronger graphics than the mobile phone.

You are almost right. Definitely, computer graphics are much stronger than mobile. For this reason, the users who have downloaded the PES 2021 game on the computer are more satisfied with the graphics of this game. But you are not going to get poor graphics on mobile either. This Android game offers remarkable graphics for both mobile and desktop computers. The physics of the players is very close to reality. The state of the audience and even the color contrast of the game is acceptable. The faces of the players are very close to reality. These small things together give you the feeling of playing a real football game.

Every team sport is famous for its teams. Some sports fans are fans of the sport itself. But there are many others who are fans of the teams. The creator of the football game efootball pes 2021 is also fully aware of this position. For this reason, in this Android game, you have many prominent European teams with whom you can compete. Teams like Bayern Munich, Barcelona, ​​Manchester United, Liverpool, etc. are among the teams that are waiting for you. They invite you to take their helm and start a serious competition.

Of course, maybe you will face a big problem after downloading the Pes 2021 game. Chances are you won’t find some football teams. Teams such as Real Madrid, Manchester City, Chelsea, etc. are among the famous and big teams that do not exist in this Android game. There is a license problem in efootball pes 2021. Some prominent European teams cannot attend with their logos and uniforms. Of course, this problem has nothing to do with the teams and is a big flaw in the Konami company. You must know that there is a copyright and license law in Europe, and that is why teams ask for money to enter the games. Unfortunately, Pace 2021 does not have many licensed teams.

One of the parts that I am also very interested in is playing fantasy football. Maybe this is one of the reasons why I am downloading the PES 2021 game. Have you ever wanted to be a football player? Would you like to lead a football team? If your answer is yes, this section is very useful for you. In the football game efootball pes 2021, you can join a football team like a professional player. In this case, you only have the task of guiding a certain player. If you can play a good game, you will be noticed by coaches and officials of other teams and you can be transferred.

There is another type in the fantasy game that is related to those who are very interested in coaching. In this section, you no longer have the task of managing and guiding a player. Rather, after downloading the PES 2021 game, you have to lead a football team. In addition to guidance, you must also do management tasks well. Definitely, when you have good and talented players, other teams will come to you to buy them. You have to decide if you want to sell that player to that team or not. You have to recruit good players for your team. You should also manage your team’s budget well in efootball pes 2021 to keep up with the competition.

It doesn’t matter if you play PES 2021 on computer or phone. The football game efootball pes 2021 gives you the real and beautiful feeling of playing a professional game.

Other features of the efootball pes 2021 game