Paper War is another interesting strategy game that we present to you on the Digiroid website for Android. This attractive game has attracted many users. The paper war game presents itself as a popular game in the global market of Google Play with more than a hundred thousand installations. In the following, we will get to know some of the features of this Android game. 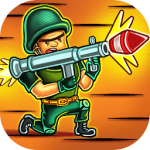 Children of the 50s and 60s had very simple games. At that time, there were no smartphones and game consoles. For this reason, the games either had a form of movement or, if there was no movement, they were formed on a piece of paper. One of these paper games was the paper war game. This game was played between two people and was formed on a full-fledged war paper. A number of soldiers and war tools were divided equally among the players and they could start playing the game. Now this game has reached new generations from the 50s-60s. Today we are with you by introducing this Android game . At the end, you can also download the paper war game. Stay with us.

Now that you have enough information about the location of the enemy, it’s time to destroy them. You have to shoot at your enemies and destroy them using offensive tools. For example, you should use your soldiers who can shoot arrows or grenades, throw grenades at your enemies and destroy them. These steps will be repeated several times between you and your opponent. Any of you who can use your opportunities in a suitable way, you will definitely win this race and destroy your enemies. So be very careful so that you can destroy important targets from the enemy in this game. I hope that by using this paper war game tutorial, you can get the necessary result in this game.

Some other features of the paper war game

As much as you can win in this game, you can definitely increase your power to continue the game. You need to buy better equipment for your forces, if you buy the right equipment, you should be able to upgrade them. For example, you should be able to choose helicopters, tanks, infantry soldiers and some other troops in a very appropriate way to win a full-scale war against your rivals. But it is also very important to mention these points that you have to place your forces in a very appropriate way in order to be successful in the paper war game so that they are safe from being hit by enemy arrows and shrapnel. This is a tactical and technical game. Be very careful.

In the paper war game, you can use many different forces to participate in the war. For example, you can use helicopters, foot soldiers, tanks, jets, trenches, snipers, etc. to increase the strength of your army. By using the right tools, enemies will not dare to approach you. But a very important point in this game is to hold weekly challenges and competitions, in these competitions you can earn good points. Many users are looking to download the mod or infinity paper war game. But don’t forget that the creators of this game spent a lot of effort and money to make it. Therefore, we request you to refrain from downloading the infinite paper war game or the separate mode.

General features of the game