Monopoly in Farsi Monopoly is one of the most interesting games. We are planning to introduce the Android version of this game to you dear users on the Digiroid website. Monopoly game is one of the products of Marmalade Game Studio. Many users have downloaded this game from Google Play. The statistic of more than one million installs is a very good number for a game that is offered as a paid game. If you want to be entertained for hours, be sure to stay with us until the end of this post. 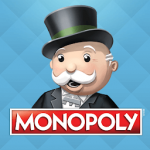 Among the games that have made their way from the past to today, the snake and ladder game , the ruling game , and finally the Monopoly game are among the attractive options for users. Monopoly is an attractive and user-friendly game. In this game, as a powerful businessman, you have to do a series of tasks to finally win. This game is a multiplayer game that you can play with your friends online. In fact, this game was first presented in board and paper mode. But today, with the expansion of the Android operating system, this game has found its place in users’ mobile phones. In the following, we will introduce this game more. Stay with us.

At first, I must say that this game has different versions. We have included its external version in this post. In the future, we will provide the Iranian version of this game for users who are looking to download the Iranian Monopoly game. But let’s introduce this game. In this Android game, the goal is to earn more money and have a stronger business. Actually when the game starts, you have to roll the dice. By throwing the dice, a number will be shown to you. As many as the number written on the dice, you must move forward. In the house where it is placed, you are suggested to do business or purchase. Your economic sense dictates whether you pay attention to this offer or pass it by.

For example, you will probably be suggested to buy a restaurant in house number three. You have to decide whether you want to buy or not with the money you get at the beginning of the game. If you make the purchase, later if other players are placed in the house related to your purchase, they are obliged to pay you an amount as rent. In fact, in this game, with smart ownership, you can earn a lot of rent and pocket it. The sense of ownership makes many users look for downloading the Monopoly game for Android. There are other very important points in this game. For example, you should be very careful with your money and purchases. Be very careful not to spend your money on unnecessary things and wrong purchases. It is better to buy focused and intelligently.

Many users are looking to download Monopoly Mod game. But we recommend that you never download the mod or unlimited money version of this game. Now you can download the Monopoly game for Android from the Digiroid website by visiting the download section .