The Modern Warships game in Farsi is a very attractive multiplayer online game for mobile game fans. Today, in this post, we have introduced this game in detail. So stay with us to download Modern Warships. This game is made by Cube Software . 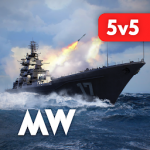 Online games are very attractive to promote competitive spirit among users. Many users spend hours playing an online game. Therefore, today we decided to introduce an attractive online game for users. Modern Warships is one of the games that I have a lot of fun with.

When we are moving in the seas, enemies may appear in our way. These enemies are no longer mounted on wooden ships with skeletons on them. In fact, their battle has become a battle of modern warships. The Modern Warships game is also working on the same basis.

Fight with the new ship in Modern Warships

The story and style of Modern Warships is a 5-player game. In this game, which is also online, you will face other enemies randomly or predetermined with 4 other teammates. When you enter the game, there is no news of enemies. But after some time moving in the sea, the radar of your ship will observe the enemies. It is at this moment that you will notice the presence of enemies.

It is your duty to deal with your 5 enemies like a powerful commander and a smart teammate. The war of ships is completely different from the war of humans. In other online games such as Call of Duty Mobile , we can destroy the opponent by shooting a few arrows. But in the battle of modern warships, there is no such comfort. In Modern Warships, you have to target enemy ships well using long-range cruise missiles to prevent them from winning.

The Modern Warships game, like any other game, has a series of minimums and maximums. The game initially gives you some minimal resources. It is you who should earn more money by playing well and professionally. The more wins you have, the more money the game will give you. You can buy the right equipment for fighting with this money. Then doing a full-scale war on the sea will be very enjoyable for you. Of course, some friends use the game Modern Warships endlessly, which I don’t think they get any pleasure from playing their game.

In this Modern Warships game, as we said above, you have to cooperate well with your teammates to win naval battles. At the beginning of your life you will have a weak ship with weaker facilities. Of course, your work in the first and second levels starts with this small ship. But to succeed in the higher levels of the Modern Warships game, you need more equipped ships.

You have to win a lot of money in this game and buy suitable warships. When you buy a ship, you need to upgrade its equipment. For example, your ship has a cruise missile with a range of 5 km by default. If your missile hits the target ship, it can cause 1000 damage to that ship. But what if a ship was within 10 km of you in Modern Warships. Your missile will definitely not reach it. Therefore, to succeed in Modern Warships, you need to buy missiles and updated equipment.

Do not neglect the defense system

When a missile is fired at you in Modern Warships, you should not stand idly by. This game gives you 2 possibilities to deal defensively with enemies. The first solution is that if a missile is fired at you and hits you, immediately notify the ship’s repair department. This is done by pressing a green button in the middle of the screen. This unit will repair the damaged part of your ship.

But in Modern Warships there is another solution that prevents the missile from hitting the ship at all. When a cruise missile is fired at your warship, you can send a decoy fire to detonate the missile before it hits your ship. With this, the missile will no longer hit your ship and you will actually perform a preventive operation in this game. Of course, the use of fire defense system and ship repair system is not unlimited and you can only use it a few times in each game.

Other features of Modern Warships

Download the new version of Modern Warships game for Android