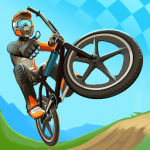 Graphics play a very important and effective role in Android games. Some games, such as Candy Crush Saga , do not require such high graphics. For example, adding some animations or using beautiful colors can increase the attractiveness of this game. But some other Android games such as Kalaf Duty Mobile and Mad Skills BMX 2 require high graphics. In fact, the graphics of this game should be as if the user is playing a professional cycling game. In this Android game, the physics of the cyclist as well as the bike are well designed. You feel like playing a real game while playing this game. This makes you enjoy playing the game to the fullest.

But the graphics of the racing bike game that we put for you today are not only limited to the physics of the elements. In the Android game Mad Skills BMX 2, several different elements are used to make it more attractive. For example, the movement of the spectators and their cheering has added to the attractiveness of this game. Also, the shape of pedaling and the movement of the bike are other factors that have added to the charm of this beautiful game. In fact, it can be said that the creators have implemented their ideas well to make this game.

Users who install the bike riding game are all looking to play an attractive and beautiful game. But the main work will start after installing the bike riding game. You compete with other competitors. At first, you will enjoy this competition because the game is in its initial and easy stages. But the further you go, the more your problems will be. It will no longer be easy for you to compete with others. The reason for this is that your bike is old. You have to think of a new vehicle to compete in Mad Skills BMX 2.

In the Android game Mad Skills BMX 2, you have the ability to buy and of course customize the bike you want. In fact, you can customize your bike in this racing bike game. According to the announcement of Google Play, in this Android game, seven bikes are intended for users. Users can compete with others by purchasing any of them. Also, don’t worry if the bike you are looking for is not powerful enough. In this Android game, you can customize and upgrade the desired bike.

Android bike riding game consists of two parts: bike and rider. In this game you have the possibility to customize your bike. For example, if you are not satisfied with your outfit, you can change it. Another possibility that is available to you in this field is choosing the right helmet for a bicycle rider. According to the announcement of the game company, in this game there are more than a thousand options to customize and upgrade your desired rider. You can choose any one you want according to your taste and design your desired rider. For example, you can change the rider’s clothes. You can edit the rider’s helmet and other safety equipment. Have a professional rider in Mad Skills BMX 2 with this feature.