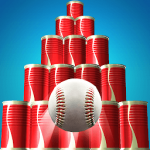 Although many users are looking for the game of throwing balls into a can for the computer, but the game Hit & Knock down, which is only for the Android version, is a popular game. But what is the importance and reason for the popularity of this game? Perhaps the greatest feature of this game can be considered its simplicity. But in addition to the simplicity, the possibility of using different balls can also be considered an attractive option. In this Android game you can use different balls.

For example, you might get tired of handling the baseball after a while while playing Hit & Knock down. So you need to change your ball. You can substitute basketball for baseball. After downloading the can thrower game, you get access to many balls that belong to different sports fields. For example, you can hit the cans in the game with a volleyball ball. This feature makes the game not boring for you.

Hit & Knock down Android game is an attractive Android game for Android. This game, which is known as the game of throwing the ball into the can, is also very popular in the global market of Google Play. Now you can download this game made by Mobrix from the Digiroyd website .

Download the game for Android with a direct link