Hasht Khuan 2 is a strategy game for the Android platform. In this Android game, you have to use the cards you have to dominate and defeat your other competitors. In the continuation of this post, we are at your service, dear users, by introducing the game Hasht Khuan 2. So stay with us until the end. 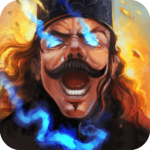 Eight Readers game, which is an Android game in the strategy category, is very similar to Fruit Craft Android game . Of course, this similarity is not in the graphics of the game or its cards. Rather, the similarity we are talking about lies in the style of the game. In the Android game like Fruit Craft, you have a series of cards at your disposal and you have to use and rely on the power of your game cards to overcome other competitors and defeat them. Exactly the same scenario exists in the game we mentioned. In that game you had to win by using fruit cards but in this game you have to win by relying on legendary character cards. In the following, we will discuss some features of this Android game , so stay with us until the end of this post.

What is the game of eight readers?

It was a few years ago that this game, named Hasht Khuan 1, entered the market and was able to acquire many users. It was precisely for this reason that the creators of this game thought of creating Hasht Khuan 2. As we mentioned above, this is a strategic Android game. In this game you have a number of cards at your disposal. You enter the competition online. You and your opponent have to compete with each other using the cards in the game. Whoever has stronger cards can win this game. It is very important that you can choose the right cards for you. Your victory and defeat depends on these cards. But in the following, we will get to know some other features of this attractive Android game.

One point that you should pay attention to is that many users are looking to download Hasht Khan 2 mod. This version has many security and technical problems and it is not right to use it ethically. We on the Digiroyd website suggest that you avoid downloading the hacked Hasht Khan game or the mod. These versions can cause a lot of damage to your mobile phone.