The Golden Age game is one of the attractive Android games in the strategy category. This beautiful Android game has attracted many users. More than 500,000 downloads in Iranian markets, as well as countless positive comments, are all proofs that Asrtallai is a popular game. Today, in this post, we are going to give a full introduction to this game. So stay with us until the end of this post. 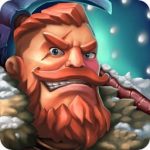 Golden Evening is very similar to Clash of Clans. Both games are in the strategy genre. Of course, these two games also have differences that we will get to know later. In this Android game, you have to compete online with competitors and be able to defeat them. This attractive and beautiful game has different parts. In this game, you can become a member of a clan or an alliance to have a higher power so that you can attack and destroy your enemies with a much higher military power. If you want to introduce yourself as a strong and powerful ruler, be sure to download Golden Age from the end of this post with a direct link.

All the products that are made in the world prepare training for their users to work better and increase efficiency. The Golden Age game is based on this exact foundation. In this Android game, you need to study the appropriate training for success. If you want to win over your competitors in this game, be sure to follow the Golden Age game tutorial. As we mentioned above, this game is very similar to Clash of Clans. In this Android game you have to build your territory first. To do this, you must establish and support your important and vital buildings and centers. In the next step, you have to organize your military and defense forces so that you can win the future wars in which you will participate.

In the Golden Age game you have to train dragons. The dragon plays a very important role in future wars and can determine the fate of your war. For this reason, you should not neglect the dragon. There is also a part in this game where you can choose the hero of your territory. Each realm can have a hero. Each hero has its own unique characteristics and features that are very important in the fate of your realm. You must cooperate with other players and friends to increase your power. You have to form an alliance or join the alliance of other players and ally with them. This alliance can be very beneficial for you, in wars, the military forces of friends will come to your aid and make victory more likely for you.