Fly Corp: Airline Manager game is another management game that we intend to introduce to you, dear Digiroyd users. In this attractive and of course management Android game, you are responsible for managing the airlines of the entire world. In this game, you have to focus your attention to provide proper service to the passengers of this fast vehicle. If you are also looking for an interesting management game, stay with us and Fly Corp: Airline Manager until the end of this post. 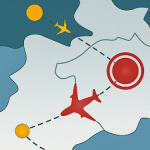 Management is an important factor in the existence of some people. Some users are always interested in showing their management in different fields, even games. It doesn’t matter how hard it is, the important thing is that managing work is enjoyable. Now, if someone can show his management in the field of airlines, he might enjoy it more. The game Fly Corp: Airline Manager was produced for exactly this purpose in CASUAL AZUR GAMES . As we said above, today we are going to introduce an attractive management game. But why do we call this game attractive? In the following, we will discuss the features of this real passenger plane game for Android.

In the beautiful game Fly Corp: Airline Manager, you play the role of a businessman interested in airlines. At the beginning of this game, you have to choose the country and city of origin to start your work. For example, you choose dear Iran as the starting point of your work. By choosing Iran, the city of Tehran will be unlocked for you. In the next step, you should also create the first airport connected to Iran. Probably choose Mashhad or maybe Isfahan. You draw your happy finger from Tehran to your desired destination city. With this, the airlines or the air corridor between these two cities will be activated and the first flight will be made in Fly Corp: Airline Manager. This process will continue.

You have to connect other cities as well. Of course, in doing this, you should not act without a plan and strategy because you will face problems later on. We suggest that you first connect all the cities to the main center i.e. Tehran and then create an airway between other cities. For example, first connect Mashhad-Isfahan-Shiraz-Yazd-Kerman, etc. to Tehran. In the next step, connect the named cities to each other. The most important thing in the game Fly Corp: Airline Manager is to use a correct and appropriate strategy. Never forget your strategy. We suggest that you consider different things when creating airlines between different cities of each country.

As for airlines and planes, we have two types of flights, which are called domestic and international. Domestic flights take place within the borders of a country and international flights take place outside the borders of a country. We said above that you chose Tehran as the starting point of your work. After choosing Tehran, other cities of Iran also own airports and airlines. But in the game Fly Corp: Airline Manager, handling domestic airlines is not enough. In this beautiful and attractive game, you have to establish the airlines of other countries. You have to connect countries. This will make more flights on your airlines and you will have more money.

For example, after completing the airlines of our dear country Iran, you choose Iraq as the next country to connect with your airlines. By selecting this country, its capital, Baghdad city, will be displayed with a larger dot. First, you need to connect Baghdad to another city in the same country, which you will probably choose Mosul or Sulaymaniyah. Once a number of flights are established in this country, you will notice a new challenge. Some of the travelers in Iraqi cities intend to travel to Iran. Even this possibility exists for Iran. It is possible that some Iranian travelers intend to travel to Iraq. At this time, you have to create an airline from one of the cities of Iraq to one of the cities of Iran in the game Fly Corp: Airline Manager.

In the game Fly Corp: Airline Manager, the more passengers use your airline, the more you earn. But on the other side of profit, there is also loss. You must also be able to accommodate a large number of passengers. In this aviation game, you have to move the passengers at high speed. Therefore, you can strengthen the airlines and of course the planes as well. By default, the first level of Airmail will be activated for you. This type of flight does not have a high speed and its capacity is also low. In the passenger airplane game for Android, you have to increase the number of your airplanes. Every airplane should be strengthened in terms of the number of passengers and also the flight speed. In this way, you can move passengers at a higher speed and get them to their desired destination.

Now you can download the attractive and beautiful game Fly Corp: Airline Manager from the Digiroyd website. Also share your thoughts about this Android game with us.