FIFA 2021 game – FIFA 2021 is an attractive sports game for fans of football games. Today, in this post from the series of Android game posts on the Digiroyd website, we have introduced the FIFA 2021 mobile game. So stay with us until the end of this post. 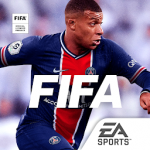 The sport of football has many fans inside and outside of Iran. If this sport becomes a game, it will definitely bring a lot of downloads. ELECTRONIC ARTS company is also well aware of this issue. Hence, the company has released the FIFA 2021 football game for mobile along with Windows versions – game consoles, etc. This game is now available to the public in the global market of Google Play. But Iranian users do not have the ability to download this game from Google Play. Many users are looking to download the FIFA Mobile Google Play game. But due to various issues, it is not possible to download it for Iranian users. Therefore, you can download this Android game at the end of this post.

By downloading the FIFA 2021 game, you enter the real world of football. The feeling that is conveyed to you while playing this game is the same as if you are playing in a stadium full of spectators. The fans are cheering you on. They go with the shins of your players honestly and wholeheartedly. If you can attack the opponent’s goal well and beat them, you will make your fans happy. So if you want to become the favorite of the fans, this game is for you. The attractions of the FIFA 21 game are so many that every year there are many discussions between the fans of this game and the fans of the Konami game.

In a football game, there are many things that contribute to its appeal. From the noise of the spectators to the movement of the players, they are all effective. Once you have downloaded FIFA Mobile, you will want to play your game in a very high quality. You want the player’s body movements to be done beautifully and close to reality. When your desired player shoots a shot towards the goal, the goalkeeper will also show a movement close to reality. Some users go to download FIFA 21 game for Android for different reasons.

Become the champion of Europe

You can participate in the European Champions League in the FIFA 2021 game for mobile. If you are a soccer player, you definitely know the charms of this league. Different teams try to become champions in their leagues every year. Participation in this prestigious European tournament is a prize given to champion teams in European leagues. These competitions attract many fans every year. You can also enter these competitions by downloading the FIFA Mobile game. You just need to manage your team well and win this cup. Then the fans will love you. To become a legend of your favorite club, you need to win the Champions League.

There are many teams in the FIFA 2021 mobile game. Perhaps one of the advantages of the FIFA Nest game over other competitors is the purchase of licenses for different teams. In this Android game , you can compete with current and prominent teams. Teams like Bayern Munich and Dortmund from the Bundesliga or Real and Barcelona from Spain as well as Manchester United and City, Liverpool and Chelsea from the English Premier League are waiting for you. Leading or competing with your favorite team can be very attractive. If you are a Bayern Munich fan, scoring with Robert Lewandowski will be exciting for you. If you are a fan of Ronaldo or Messi, you will definitely like to play with these players.

A team needs good and prominent players along with its staff. Good players must be made. The FIFA 2021 mobile game has a very special feature and section. In this Android game, you can make players out of ice cream sticks. There is a part in this game where you can train your favorite player. You can specify in what way the player you are looking for needs more practice. If you are going to develop a striker, you need to work with him on scoring goals. If you plan to deliver a midfielder to the team, you must work on the passing and speed of that player. This game allows you to develop your players well and make your fans happy.

Other features of the FIFA 2021 mobile game

Download the game with the new version for Android ARM

Download the game with the new version for Android ARM64