Debarna online game is one of the interesting games for Android. Today we are going to introduce a fun game to you dear users. Debarna online can remind us of the past. When we were together with our friends or family and we wanted to play a beautiful game. This Android game is known to many users. For this reason, today we are going to introduce this game to you on the Digiroyd website . Stay with us until the end of this post. 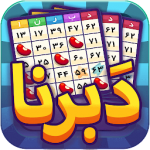 When you are in a group with your friends or family, you might find it interesting to play a group game. Among different games such as Snake and Ladder, Mench, Hakem, etc., playing another game can also be attractive for us. Debarna is the attractive game for family and friends. Many users may have already played the old Debarna game. For this reason, they know the importance and attractiveness of this game. But in this game, the old Debarna was facing problems. One of these problems is playing the game physically. In this case, you should be close to your friends and acquaintances, one person reads the number out loud and others fill the game board with their pieces. Another problem in this game was the limitation in the number of pieces. Of course, this problem can be solved with beans. In the continuation of this detailed post, we will introduce the online Debarna game. Do not go anywhere and be with us.

The old Debarna game is a multiplayer game. In this game, a number of cards are distributed among the players. On the other hand, there are many barrels with a number stamped on them. One player reads the numbers on the barrels and the other players, if they have that number, place a device instead. Beans were usually the best supplementary tool in this game. This cycle is repeated over and over until the beads are finished. Anyone who has filled all the numbers on his card, announces and removes the card from the game. Now the same scenario has entered the online arena and the game of Debarna has been formed online. Today we are going to introduce this game to you.

Users have installed the Debarna game. This game provides many features to users. You can play from one to eight people in this game. This number is a very suitable number for a multiplayer online game. Also, the ability to choose a piece from among countless and different pieces is another feature of this game. After downloading the Debarna game with a direct link, you can chat with your friends during the game. The same conversation feature can be very suitable for you during the game. Among the other features of this Android game, we can mention the ability of leaderboard or ranking of users. Also, in this game, you have the ability to progress. In the online Debrana game, you can level up and improve your level.

You can have fun with your friends for hours by downloading the Debarna game, this Android game and enjoy your time a lot. This game will be a staple of your parties.