Clash Royale is another product of SuperCell, the same company that owns Clash of Clans. This game is a very attractive style of strategic games. This popular game with more than 100 million installs in the global market of Google Play can introduce itself as a popular game. In this post, we are going to give a full introduction to this game. If you are also interested in this style of games, be sure to join us and install Clash Royale. 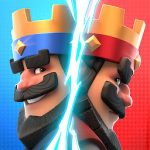 Users who have spent hours playing Clash of Clans are very happy to hear the name of this game and the word Clash. For this reason, many users are looking to download the new version of Clash Royale. We have introduced this game in full in this post. This game is almost similar to Clash of Clans. In this Android game, you have to attack the enemy’s castle using your army and offensive forces. This game is very close to Pocket Army game in terms of style .

But be very careful. At the same time as you attack the enemy’s castle, they are also thinking of retaliating your attack. Enemies will attack your castle. You have to take strong defensive measures using magic and military forces and the people of your castle so that you can stop your enemies from attacking the castle and not let them conquer your castle. Another thing that you should be very careful about is upgrading your forces. If you want to be successful in the Clash Royale game, you should also upgrade your forces in addition to attack and defense.

We are at your service by downloading Clash Royale for Android. We said above that you need to upgrade your forces. It is very important to be able to fight and confront your enemies with strong forces. In this game you own cards. Each card is specific to a military force and a character. These cards have their own powers. If you plan to compete with high power, you must upgrade your forces and cards.

This game is in a very good condition in terms of graphics and game style, and that is why it has attracted many users. The satisfaction percentage of users in the global market of Google Play with this Android game is another thing that can be a proof of the satisfaction and goodness of this game. If you also want to play this interesting game, you can download Clash Royale with a direct link at the end of the post.

Another attractive feature of Clash royal game is playing online with real users around the world. You can compete and battle with other players completely online.