Carpet Bombing 2 is an Android aviation game. This beautiful and attractive game can be placed in the category of games that can entertain you for hours. Today, we have decided to introduce this Android game in this post on the Digiroyd website. If you are also looking to download a free fighter plane game, stay with us until the end of this post to review the best fighter plane game together. 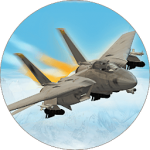 Maybe Carpet Bombing 2 can be considered the best war plane game for Android. This game is so attractive and charming that it can attract any gamer. This game, which is also known as carpet bombing, has been published in the game studio Synthetic Mind. The game in question has more than one million installs in the global market of Google Play and is considered a popular game with a good score of 4.3 out of 5. Now we will examine the reasons for the popularity of this game.

Graphics have always been the most important part of mobile and computer games. Graphics cannot be ignored. Most of the game designers go towards huge and very heavy graphics. Therefore, their production games are in a very bad situation in terms of volume and processing speed. For example , Call of Duty Mobile game has a very large volume due to the use of a heavy graphic environment. But in the game Carpet Bombing 2 there is no news of this problem.

Carpet Bombing 2 game uses a simple and two-dimensional graphic environment. For this reason, the size of the game has decreased to a great extent and this game can be played on old mobile phones as well. But the small volume of this game has not affected its quality. This Android airplane game is made in a very attractive way. For example, all the different components and elements in the game were produced with very good quality. This will add to the attractiveness of the game. For this reason, you will enjoy playing this fascinating game. For example, when you are bombing the enemy’s positions, after the bomb hits the enemy’s equipment, smoke and fire will rise from it. These small issues can add to the appeal of this free warplane game.

Education in the Android airline game

Training and how to play the game is one of the important points in Android games. In the game Carpet Bombing 2, this issue is well implemented. In this free fighter plane game, you have to go through three stages as training. These trainings start from how to guide the fighter and end with how to shoot at the targets. In the first training stage, you have to guide your fighter in the best way and pass through the obstacles. After that, he enters the next stage, which is shooting at the targets. At this stage you have to shoot at the desired targets. In the next step, you have to blow up the enemy’s ground equipment using fighter bombs.

By going through these training steps, you will become a professional pilot to fly a warplane. Now is the time to steal the sleep from the eyes of your enemies like an endless nightmare.

According to Google Play, the game Carpet Bombing 2 provides you with more than 15 planes. You have to achieve success by using these fighters in this game which is the best war plane game. Planes differ from each other in terms of power, speed, damage rate, number and type of equipment. You can choose the best war plane for yourself and attack the enemies with it. You are also given the opportunity to upgrade your desired aircraft in terms of power and safety as well as equipment. For example, you can install new missile and bomb equipment on the plane you want. By doing this, you can easily destroy the enemies and the enemy’s tools and introduce yourself to others as a stubborn enemy.

Regarding this game, it should be mentioned that some people believe that Carpet Bombing 2 is an Iranian war plane game. But this is a free foreign air combat game that we have put for you today on Digiroid.

Now you can download the game Carpet Bombing 2 from the Digiroyd site. We also suggest you to visit the game Airlines Manager – Tycoon