Boom beach in Persian is a very beautiful and attractive strategy android game. This Android game was developed by Super Cell game studio, which is also the creator of Clash of Clans game. Today, in this post, we are going to fully introduce this game and also download Boom Beach game. So stay with us until the end of this post. We have considered the new update of this game for you. Stay with us. 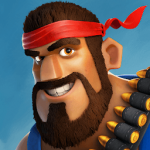 Strategy games can be one of the most popular styles in Android games. This style has attracted many users. Today, in this post, we are going to introduce one of the most beautiful and most downloaded Android games to you, dear users of the DigiRoid website. We are at your service. By downloading Boom Beach game, this game has more than 100 million installs in the global market of Google Play. Also, by registering more than 1 million installations in Iranian markets, it introduces itself as a popular game among Iranians. In the following, we will get to know other features of this game. At the end of this post, you will be able to download the new Boom Beach update. So stay with us and the Boom Beach game until the end.

Boom Beach is a strategy game. In this game, you are responsible for attacking and defending your city and territory. In this very beautiful and attractive Android game , you will first build a defensive building. After establishing the defense building, the enemy will attack you. Enemy forces are not strong and will be defeated easily. Even they cannot inflict serious and great injuries on you. Once you repel the enemy’s attack, it’s your turn to attack. By using the spoils you got from your enemies, you have to strengthen your army so that you can attack the enemies. You need to increase the number of your troops.

In the Boom Beach game, the territory of each user is built on an island. That’s why you have to go through the waters to reach the islands to attack your enemies. To cross the waters you need a ship. With the money earned from your wars, buy suitable and good warships for your army. Use these ships to move your forces and bring them to the islands of the enemies. Once you reach your enemies, you have to attack them and destroy them by relying on a suitable combat pattern. By winning over the enemies, you can get a lot of trophies and coins, you can gradually increase your army in Boom beach and easily build a very large territory for yourself.

If you also like this game, you can refer to the download section to download the new Boom Beach update. Many users are looking to download the version of Boom Beach mod or infinite, but we recommend that you avoid downloading them due to the many security problems of the mod and infinite versions. The best thing is to use the official versions of this game.

Other facilities of Bom Beach