Bagh Nagar game is one of the attractive Iranian games in the category of puzzle games. Baghnegar has separated his account from other puzzle games by presenting a very attractive and beautiful story. In the rest of this post, we are going to give a full introduction to this game. This Android game has made many differences with other puzzle games. If you are also interested in this puzzle game, stay with us until the end. 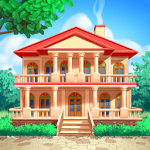 Puzzle games in different forms have been guests of our mobile phones for several years. These games are offered in different styles. For example, they may be placed next to each other in the form of several puzzle pieces. It can also be in the form of placing fruits. The gardener game that we are going to introduce to you today is exactly in the form of placing several fruits next to each other. But there is also a very interesting story behind this Android game. In the following, we will get to know more about this Android game. At the end of this post, you can download the new version of Bagh Negar game. Stay with us until the end of this post.

The thing that separates Gardener from other puzzle games is the story of this game. In this game, Android Nagar returns to Iran with his father after many years. Upon entering Iran, they go to their garden house. But they see that house in a dilapidated form. In the meantime, the character of Aristotle, who is a very married person, falls in love with one look, not a hundred hearts. Negar and his father plan to rebuild the house. For this reason, Aristotle also helps them in this work. Aristotle helping them in the gardener’s game allows him to win the heart of this girl. But what is very important is Aristotle’s way of helping.

As we said above, Gardener is a puzzle game. At the beginning of the game, Pedernagar orders Aristotle to quickly move one of their suitcases into the garden house. For this, Aristotle needs a number of stars. To get the star, you have to put together the fruits in the game in the form of a puzzle. In fact, those who have downloaded Bagh Negar game with direct link know. that this game is very similar to the Kennedy Crash Saga game . Sorting fruits in the form of three or even more can be very similar to other puzzle games.