Pocket Army 2 is a strategic and war game. This game was designed and introduced to the market by Novin Shade game studio. Today we are going to introduce the full game of Pocket Army 2. If you are also a fan of war games, stay with us until the end of this post. This game is very different from other war games. For this reason, you can have fun with this game for hours. 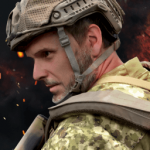 Among mobile games, war games have always had their own fans. Many users are looking for games like PUBG and Kalaf Duty Mobile. These games take up a lot of space on mobile phones due to their heavy weight, and they are not available on all mobile phones and tablets. But in between, there are games that are small in size and run easily on all mobile phones. Pocket Army 2 game is one of these light and compact games. This game currently has more than 1 million installs in Iranian markets. Therefore, this game can be considered an attractive and popular game for mobile phones. We will get to know more about this game.

The story of the game Pocket Army 2

Pocket Army 2 is a war game. At the beginning of playing this game, you have to choose your troops to attack the enemies. In the first stage of this game you have to choose ten veteran soldiers for your first battle. Once you have selected the soldiers, you will tap on the battle option and enter the campaign to compete with your rivals. In this Android game , one side of the field is you and the other side is your enemy. You should place your troops in the areas where you think the enemy will attack. Your soldiers will move automatically and fight your enemies based on their strength and will continue to win. After the victory, the spoils of war will reach you.

Many users are looking for offline pocket army game, but this game is completely online and you must be connected to the internet while playing. Another advantage of this game is the use of various war tools and equipment. You can go to war with your enemies, sniper vehicles, robots and other equipment and destroy them. Also, you can upgrade your forces and make a powerful army from them so that you can destroy all your enemies.

Unfortunately, some users are looking to use the Pocket Army 2 mod or infinite game, we strongly consider this to be against ethics. The creators of this game have worked hard to make it. For this reason, using the infinite pocket army version or mod can completely destroy the efforts of these loved ones and the enjoyment of the game will be taken away from you. So we suggest you to use the legal version of this game.