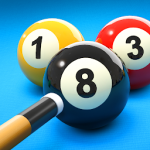 When it comes to mobile games, everyone has their own taste. For example, someone is a fan of intellectual games. If we ask him why the mind game, he says because he doesn’t like excitement. One is a fan of action games. If we ask him why he plays action games, he will definitely say because he loves excitement. But many users of Android devices are fans of sports games.

Today we want to introduce you to one of these sports games. 8Ball Pool is an online billiards game for Android that you can play and compete with live users around the world. I personally used this game. It is a beautiful game and has good graphics. In this game, the game starts according to the turn that the game gives you or your opponent. If you are the starter of the game, you must first shoot the white ball in the middle of the field towards other balls. Be careful not to let the white ball enter the holes around the game table. When the ball is shot, 2 things happen. If one of the game balls enters the goal court (holes of the game table), you must also make the next shot. But if the ball does not enter the goal, the next ball shot will be entrusted to your opponent. So it is very important to direct the white ball directly to the goal in every shot.

Features of the 8Ball Pool game:

Now you can download the Android game 8ball Pool or the billiard game from the Digiroid website. I hope you enjoy this game and send us your comments.